On July 1, 2013 during opening worship, Rev. Nancy Wilson brought her brother’s spirit in the room as she recalled his heroism and quiet, humble, leadership as a firefighter with the forestry service. A month before, she and others who loved Dave Wilson gathered for his sudden funeral.

At that memorial, someone told a story of a tanker truck that fell off the mountainside and exploded into flames. Dave’s crew assumed the dri 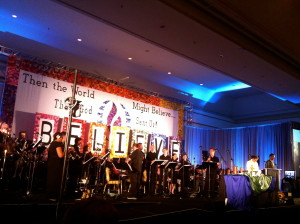 ver was dead but Dave objected saying, “We don’t know that.” So he went down the mountain just as the driver emerged from the truck in flames. Dave rolled him onto the ground, extinguishing the flames, carried him up the mountain, and drove him to the hospital.

Another firefighter spoke at his service saying that when he was managing a dangerous fire where the outcome was uncertain he would look into the crowd and if he saw Dave, he knew that the day was going to end better than it began.

How many of us would want to be known for quiet credibility and a strong reputation in times of trouble and crisis? Rev. Nancy then said that she can sometimes equate our world to a complex, volatile global forest fire wherein God looks out at the people claiming to be on God’s side, fighting the fire. Looking out into the crowd are many groups of people. Some are seen with disappointment, some with dismay, but when God sees MCC a sense of relief passes saying, “this day will end better than it began.”

In that opening worship, I was brought to my feet as I felt within every part of my being that I am all in for MCC, a movement that brings life to people who have lost hope and gives a voice to those on the margins. The entire week was full of inspiring, challenging lessons, engaging, helpful workshops and fellowship with people from all over the world who are just as passionate to pursue our unique prophetic destiny and unfinished calling as I am.

In October, I was hired as the Conference Coordinator for MCC and am so excited to bring that sense of awe, passion, and community I felt at my first General Conference. We have an excellent team of talented people and I cannot wait to see you all at MCC’s next conference, Emerge!

I have been a part of King of Peace MCC since 2011 where I am active in the congregation and am in-care for pastoral ministry with the denomination. Before being hired on staff, I worked as a congregation-based community organizer with the DART network.

I live in sunny, Florida where I work from home, often on the porch in flip-flops and yoga pants. I love ice-cream and could eat that everyday for every meal if it met all the nutritional requirements. If I could be any TV character I’d by Ms. Hughes from Downton Abbey because of her quiet tenacity and wisdom, but with the dry humor and dance skills of Elaine from Seinfeld.

To hear the rest of Rev. Nancy’s sermon from Conference click here. (@ 45 minutes)